One year, two CEO's, and lots of money.

Disclosures: I became an employee of this agency when it acquired the one I was working for. Here’s my profile on LinkedIn. Jeanne and I were enrolled in the agency’s outpatient palliative care program from January to October, 2015.

The longtime reader of this blog knows I like to page through a non-profit hospice’s IRS Form 990 to help get an idea of what they’re all about. It provides useful information about a hospice agency’s finance and operations, including the scope of their activity and how much their executives are paid.

There are easily over 50 standalone hospice agencies and corporate hospice chains here in Eastern Massachusetts. Some are well-established in their communities, others have been attracted here by the smell of death and money.

One of the agencies I follow rebranded itself a few years ago as ‘Care Dimensions.’ They were founded as Hospice of the North Shore - not ‘North Shore Hospice,’ which would have been my pick until I realized it’s pronounced ‘Nawth Shaw,’ and best articulated through lightly-clenched teeth and upturned chin.

That transaction bought me a new employer with the revised name phrase, ‘Hospice of the North Shore and Greater Boston.’ That was the start of their growth from an average daily census of about 350 to the current ADC of 1,000+/-.

Yikes! That's a lot of patients. They need a lot of nurses. I wonder what's the average case load for an RN case manager working with patients and families in the home - 10? 15? 20?

The new name Care Dimensions has a special irony, since the agency that was under Partners’ umbrella had previously passed through a series of transactions and originally had been named, ‘Health Care Dimensions.’

I’ve been looking at Care Dimensions’ 990’s for as long as I’ve been looking at 990’s, and one of the things that’s always stood out is how much they paid their longtime and now-former CEO. She easily out-earned, by a few hundred thousand dollars, her next highest-paid Massachusetts CEO colleagues, all of whom headed combined nonprofit home care and hospice agencies.

She announced her resignation in early 2016, and in May 2017 a new CEO finally took over. The local newspaper also seems to be interested in CEO salary.

The agency’s 2017 finally became available through GuideStar not long ago, so I looked through to see if the new CEO was being treated as well. Here's what I found: 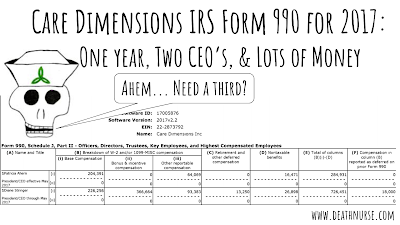 According to the financial information filed with the IRS, it seems Care Dimensions paid their former CEO $726,451 for working January-April, and $284,931 to their new CEO for working May-December. At least, that's how I read it.

So I reached out by email to their chief operating officer, to see if I was reading things correctly:

“I hope my note finds you well on this sunny picture-perfect June day.

I was looking at the most recent (2017) Care Dimensions IRS 990, and appreciate your help in clarifying something. Since that was the year your CEO changed, both are listed in Part VII Compensation of Officers, etc.

- Are these the amounts each was paid for the full year? If so, does that mean each were paid a full year's compensation, but each only 'worked' for half of the year?

- Or is their compensation based on having worked for about half of the year? If so, does this mean that the annual compensation for each is (roughly) twice that listed (~ $1.4 million for Diane, and ~$606,000 for Pat)?

I guess the compensation information on the form 990 for 2018 would be helpful in answering this, since Pat would be the only CEO listed. But that form isn't available through GuideStar yet.

Anyway, thanks in advance for shedding some light on this."

I didn't hear back after a week, so reached out to the CFO by email, since after all this is about accounting and finance.

When again I didn't hear back, I called the agency and to my surprise was put through directly to him. I think he was surprised, too.

He apologized for not responding to my email, and added, "The agency's policy is to not discuss compensation." I don't know if he meant just executive compensation or everyone's at the agency.

When I asked if my understanding was correct - that the agency paid two CEO's combined over a million dollars, and that each CEO worked only 4 and 8 months, respectively - he responded that the Form 990 "is very complicated" and required Care Dimensions to hire an accounting firm specializing in them.

He also insisted my reading of the data was not correct, but wouldn't say how or why because, "The agency's policy is to not discuss compensation."

I also came across this little nugget: 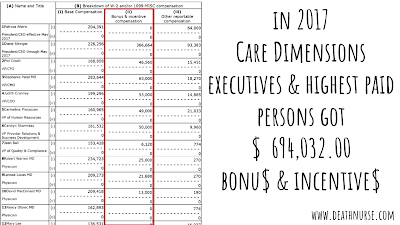 How many nurses does $700k get you in Eastern Mass?

I don't know what Care Dimensions pays its nurses, or if they've also gotten bonuses for doing the work that comes with a climbing census. I'd like to ask their executives, but since their policy is to not discuss compensation perhaps someone else could speak up.

Previous posts about the IRS Form 990

Searching for hospice at a place in Massachusetts, Part 1