Nursing orgs resisting concentration camps and genocide - so far, not so good

It sounds like a simple charge, and it is - leverage your privilege. It means we need to use our advantages to benefit more than just ourselves.

Simple and easy are two different things. The privileged act to protect their privilege, and at most give over the tinniest crumbs with great reluctance, loud complaints, and never for very long.

Organizations exist to perpetuate themselves, and reward those who protect the organization's interests most fiercely.

I thought of a question to ask nursing professional organizations - How are you leveraging your privilege (money, members, media platform, political relationships, etc.) to openly stand in resistance to the genocide currently taking place along the Southwestern US border, and to the concentration camps where it is taking place?

I thought of a way for nursing orgs to respond:

First, by watching a recent 56-minute film on YouTube called, "Caring Corrupted," produced by the Cizik School of Nursing featuring contemporary nurses talking about nurses and nursing organizations in Nazi Germany who supported and participated in genocide.

In case you missed it, the film is about "nurses and nursing organizations in Nazi Germany who supported and participated in genocide."

After watching the film, I ask nursing orgs to do the work to earn a passing grade in a seminar put together especially for nursing orgs.

You can read all about it in my post, Seminar: How nursing organizations are leveraging their privilege to resist concentration camps.

The seminar is modeled on Howard Dean's seminar on democracy: participants can earn a passing grade of 'D' by voting (literally the least you can do); earn a grade of 'C' by donating money to a cause or candidate (maybe a little painful for a moment, but still easy); earn a grade of 'B' by knocking on doors, making calls, and otherwise working on behalf of a candidate or cause (nice work, keep going); and earn an 'A' by running for office or serving on a government board, committee, or similar capacity.


So, how have nursing orgs responded so far??

Let's start with my own professional org, the Hospice and Palliative Nurses Association - HPNA.

HPNA earned a grade of "NOPE" twice last year, the only nursing org I'm aware of that specifically, intentionally, and very clearly, when asked to stand against genocide, said "NOPE" not just once but TWICE. 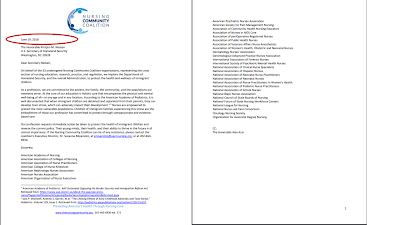 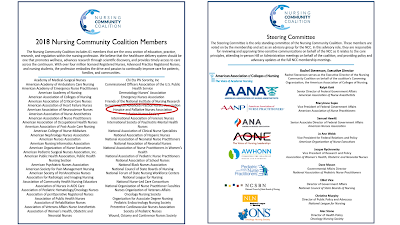 HPNA said "NOPE" a second time, after I spoke directly with the former HPNA President to make my case, and followed up via email.

She subsequently wrote back: 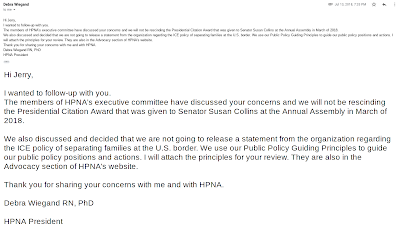 Today I had the chance to speak with Len Mafrica, HPNA's chief operating officer and expert on the use of Twitter by nurses. I've been pestering him via Twitter via HPNA's official account run by their social media guy, but it led to nothing.

I was glad for the chance to ask him about last year's decision to say "NOPE." He responded that he really didn't have any details for me about the decision, and whether there are minutes or some other record.

He noted that the Executive Committee consists of the HPNA President, President-Elect, and Clerk/Treasurer, though I'm not clear if it also includes the CEO of HPNA.

Ms Wiegand died last November. I made a donation in her memory to RAICES TEXAS, and also one acknowledging the resignation of HPNA's former CEO.(pdf)

Len noted he was aware of my request to participate in the seminar about how HPNA is leveraging its privilege to resist concentration camps, but had nothing new to report at this time, and would maybe get in touch with me after it was discussed.

I asked if the time frame for the discussion was a matter of hours, days, weeks, months, or years. He responded, "Weeks."

So at this point HPNA's transcript features:

- two NOPES -  Org says it wont do anything: because standing against genocide alongside over 30 fellow nursing organizations has nothing to do with the organization's public policy guiding principles, as evidenced by the email I received from the President following her discussion with the Executive Committee; and for some unknown reason, as evidenced by its failure to sign the June 19, 2018 letter sent by the Nursing Community Coalition, even though HPNA is a member.

- one DecBec - Replied, declined to talk (further) because: it's going to take weeks before HPNA leadership even talks about it, as evidenced by my phone conversation with Len Mafrica, HPNA's Chief Operating Officer.

More to follow. Thanks for reading. See you next time.
Posted by Jerry at 3:42 PM