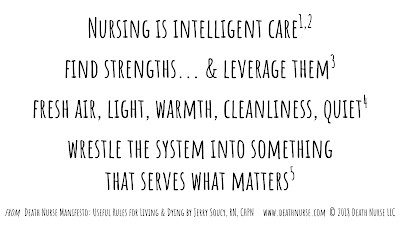 A little something to guide our practice in 2019 - the distilled wisdom of five giants:

searching for hospice at a place in massachusetts 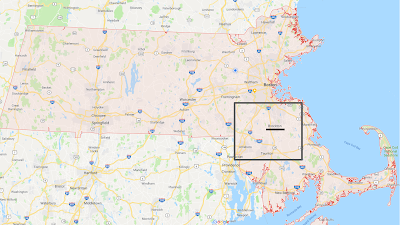 Something's telling me I must go home...

I've worked at two of the agencies discussed in this post - Good Shepherd and Seasons. See my profile on LinkedIn. I also discussed three different employment opportunities at Steward's hospice agency. The process and outcome described here are solely my own.

How would any of us answer a friend, or friend of a friend, if they asked for help choosing a hospice agency? How would we respond if we worked for one?

Decline to get involved? Suggest our own? Point to Google? Start a conversation?

At the age of thirty-five, Tom was a successful lawyer, devoted husband, proud father, and newly-diagnosed lung cancer patient.

He chose aggressive medical treatment from the start. “Always let me know my options, doc. I’ll try anything that means a chance for more time.”

Tom has been treated at a large medical center in Brockton, a city of about 100,000 located 25 miles south of Boston. Home is a small town nearby.

Tom's been in the hospital for six days, after suffering at home with back pain so severe he could not even move.

His pain is finally under control, thanks to an infusion pump delivering a continuous dose of subcutaneous hydromorphone, ordered by a senior medical resident who consulted with a pharmacist after a nurse brought them together in the middle of the night when Shelly turned to her because it seemed no one else was listening.

Tom and Shelly say they’re ready to go home with a hospice plan of care. Their medical team agrees. It took many difficult conversations to reach this point. Now it’s time to act.

Your cell phone rings. Shelly asks for help. She says they're grateful for their surgeon and oncologist. “But they can’t fix things anymore. We’re coming to the end.” 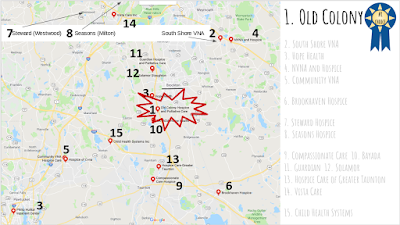 Google sees quite a few,
but here's where I'd start.

I used Google Maps to search for 'hospice' where Tom and Shelly live, then edited and organized the results.

Since I don't live or work in this part of the Commonwealth ("God save it!"), I'm only familiar with a few of the agencies on the list. But I know where to look, what to look for, who to ask, and what to ask about.

I sorted the list based on which agency I think is most worth Shelly's time and effort, and can best serve what matters to her and Tom.

Old Colony Hospice and Palliative Care is #1 on my list for several reasons. Here's my thinking:

It's a tax-exempt not-for-profit hospice established in 1979, based on the original model that predates Medicare reimbursement. It's now as much a part of the community as the post office.

Those are my first criteria - be of the community, and practice simple financial transparency. See Boo Boo's take on that here.

Tax-exempt organizations have to submit IRS Form 990 every year, and disclose information about finances, corporate governance, most highly-compensated employees, fund-raising, and other aspects of its operations.

An organization's 990 must be open and available to the public. I haven't found a hospice that lists its filings on its own website. That should be the standard, like Partners in Health and Doctors Without Borders.

I use a hospice's 990 for the broadest strokes: its annual income, expenses, net +/-, and fund balance roughly indicate relative size, how well operations are managed, and how well it's positioned for the longer-term. I think there's a sweet spot between too-small-to-survive and too-big-to-be-any-good; and between can't-make-a-buck and raking-it-in.

I also look at compensation for the CEO and any other listed employees, to see who they are, what they're getting, and how that all compares to others. I think this information gives insight into an organization's values.

I have limited but positive indirect experience with Old Colony through several trusted nursing colleagues, including one who was their clinical liaison in Boston's Longwood Medical Area. Her position was shared by a second hospice, Good Shepherd, and she directed the admission to either agency depending on the patient and family's city or town.

Other colleagues also gave them positive references, and there are no screaming red flag reviews at either Glassdoor or Indeed.

Shelly and Tom urgently needed help to meet their goal to get home soon, where he can be comfortable for as much time as possible with his family and friends.

They need expert support for what lies ahead, and I suggested Shelly consider Old Colony as their best available option - her Plan "A."

I also suggested a few questions to ask:
See also:

Can one number tell us if this hospice is any good?

This could be the start of something big

I'll describe my thinking on the other agencies in a future post.

Axial tilt is the reason for the season 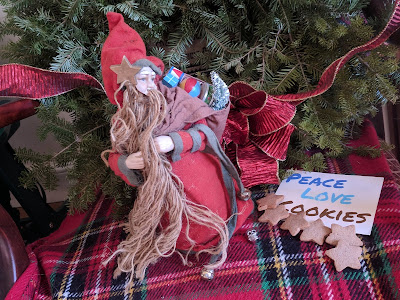 Death is a guest at every event.

Joys of the season to you! The days are getting longer and the sun is getting brighter. I just made my first pass through the new catalog from Johnny's Selected Seeds. We have much to be thankful for, and even more to do in the coming year. Here's to it!
Posted by Jerry at 8:02 AM 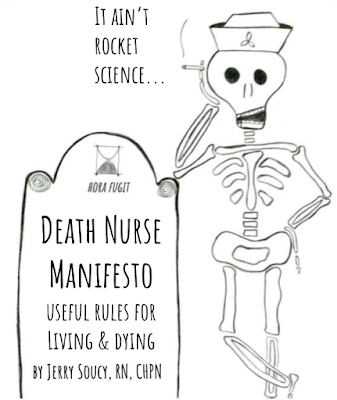 I gotta learn how to draw skeleton feet.

I've been busy offline and haven't been posting much - the most sorry-ass excuse for a blogger. Still, that's what's going on at the moment, though I'm trying to get back in the saddle.

In any event. some of my recent work will end up here sooner or later. Death Nurse Manifesto is one of those things. It's an ongoing compilation of some ideas, insights, biases, and bad jokes - rendered in a form somewhere between that of a twisted fortune cookie fortune, drunken tweet, and non-conforming haiku.

Do you have any absolute true-isms, hopeful and wise advice, or cynical observations of your own to pass along? Please, share!

I'll let this first one speak for itself. 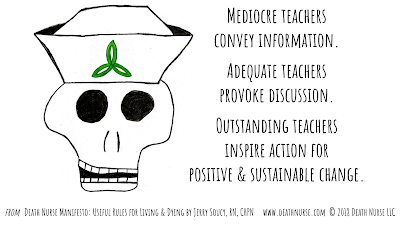 This peaceful death brought to you by...

That's a screenshot of something by Peter Baker in the Times, 'I Love You, Too': George Bush's Final Days. It's probably the worst passage in a whole pile of sappy and unhelpful reporting - and I don't only mean Baker's piece.

Thanks goodness for the caregivers.

As for the former president, I'm glad to hear he and his family experienced a peaceful death. He seems to have reached a peaceful acceptance of death, and I think that's the single most important factor to achieving one.  It also doesn't hurt to have plenty of money.
Posted by Jerry at 12:39 PM