Something about delirium, part 1

If I had to choose a single topic as the most absolutely important one that everybody who works with patients and families facing advanced illness and end of life needs to fully understand and appreciate, it would have to be delirium.

If I had to identify the single greatest concern shared by every patient and family we meet, my bet would still be on delirium. When we know delirium, we can help. If we don't, we're going to fly that plane right into the ground.

No other topic comes close to delirium in exposing the gaps in our knowledge and the deficiencies in our practice. That is as true today as it was 27 (!) years ago, when Sharon Inouye and colleagues first developed the Confusion Assessment Method (CAM) to help non-psychiatric clinicians practicing in high-risk settings identify and manage delirium:

“Delirium is often overlooked, misdiagnosed as depression or psychosis, or misattributed to dementia or senescence. In one study, 32% of cases went unrecognized by physicians.” 1

What about nurses’ understanding and effectiveness regarding delirium?

It only takes a few minutes with Google and the search phrase, “nurses understanding and effectiveness regarding delirium,” to start gathering evidence:

“A lack of education and general ignorance of delirium, in particular about the benefits of early recognition and treating delirium, emerged as a strong barrier ... as a consequence of a superficial teaching about delirium during medical or nursing studies.” 2

Where should we start?

I developed an in-service program on assessing and managing delirium a few years ago. I also tried to summarize the material in a ‘Top 5’ list, highlighting the essential points every hospice clinician should know.

Maybe we can start with a simple question: How prevalent is delirium?

The answer depends on where you look.

Let’s screen 100 people for delirium in different health care settings. The incidence of delirium in these illustrations is based on multiple sources, and varies by source. Here’s one you can check. 3 You may find the numbers I use too high, or too low. I think the exact figures are less important than the general trend. 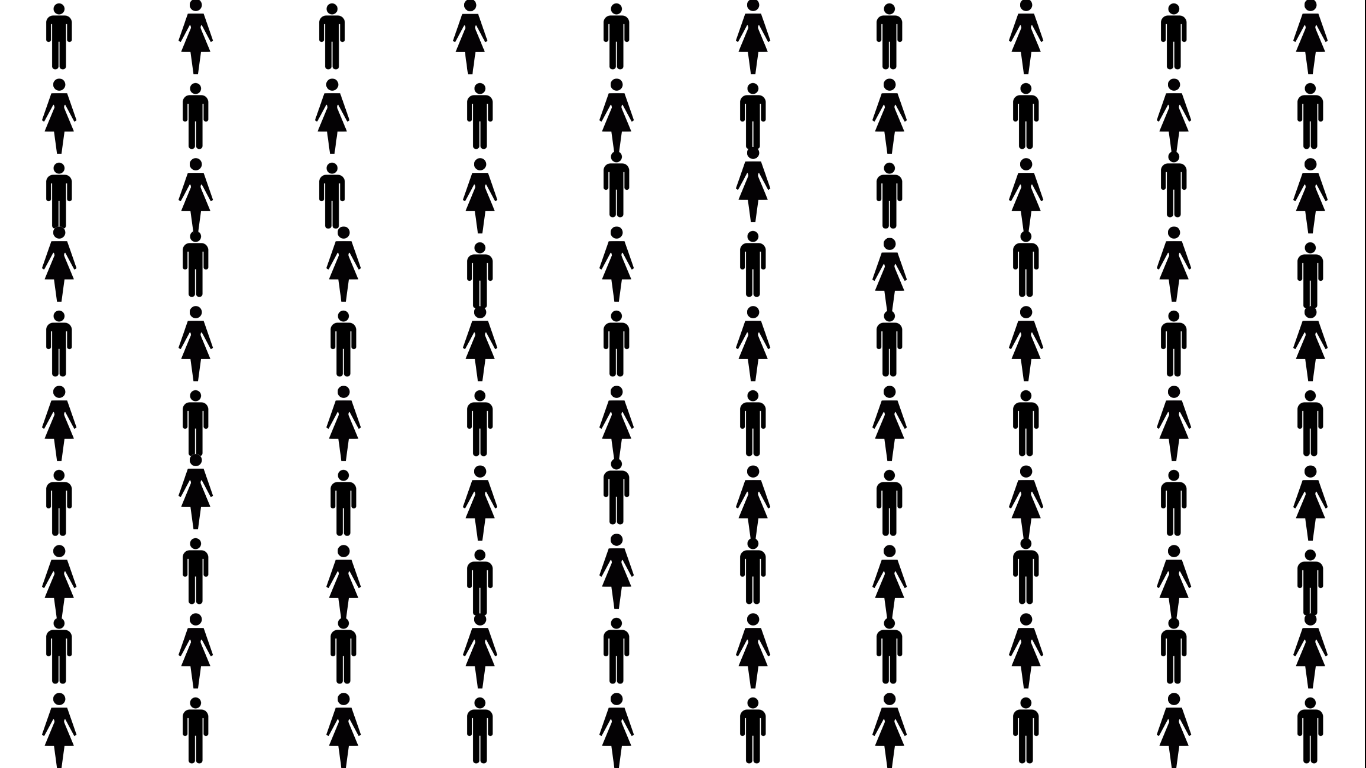 When we screen for delirium in the community, assessing our 100 while they’re out on their daily business, we’d find about this many delirious: 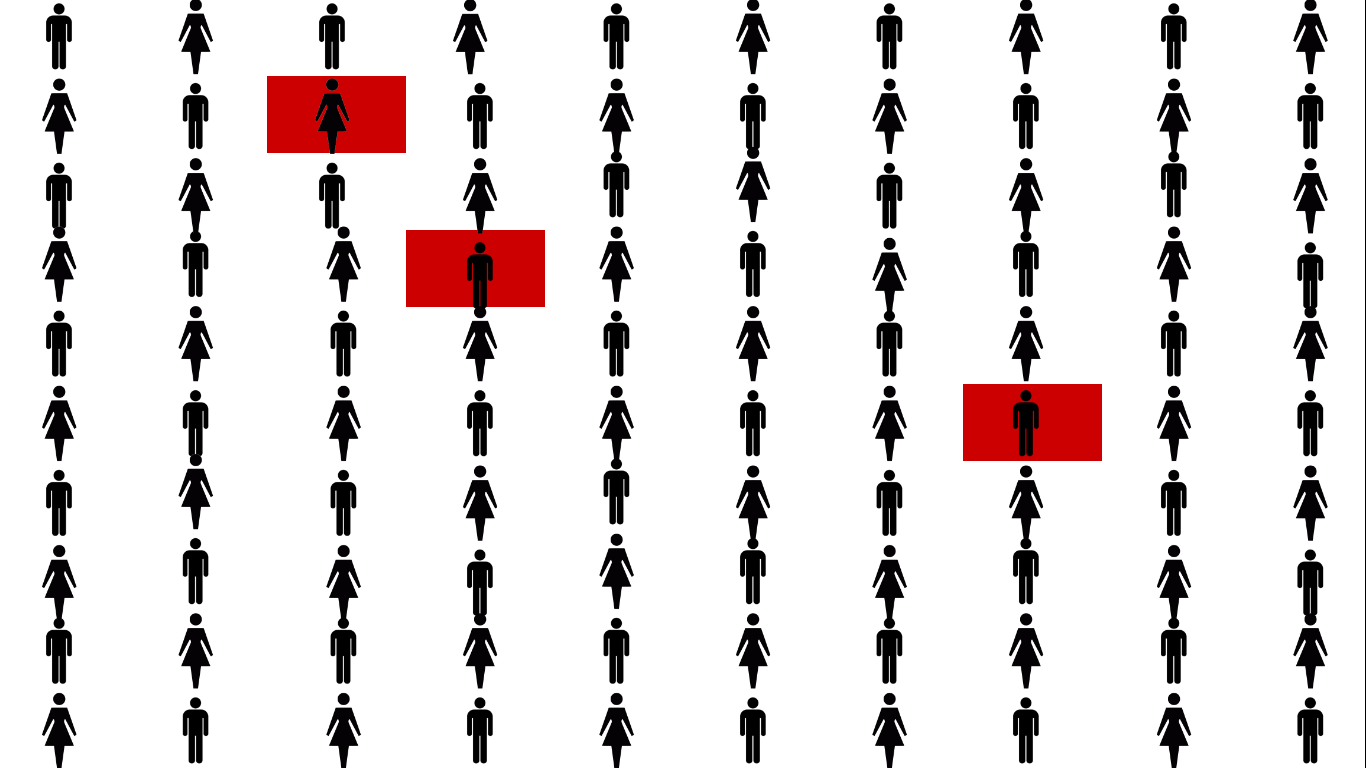 That's about 3%, much of it because of intoxication or withdrawal.

When we go to the hospital, this is what we find: 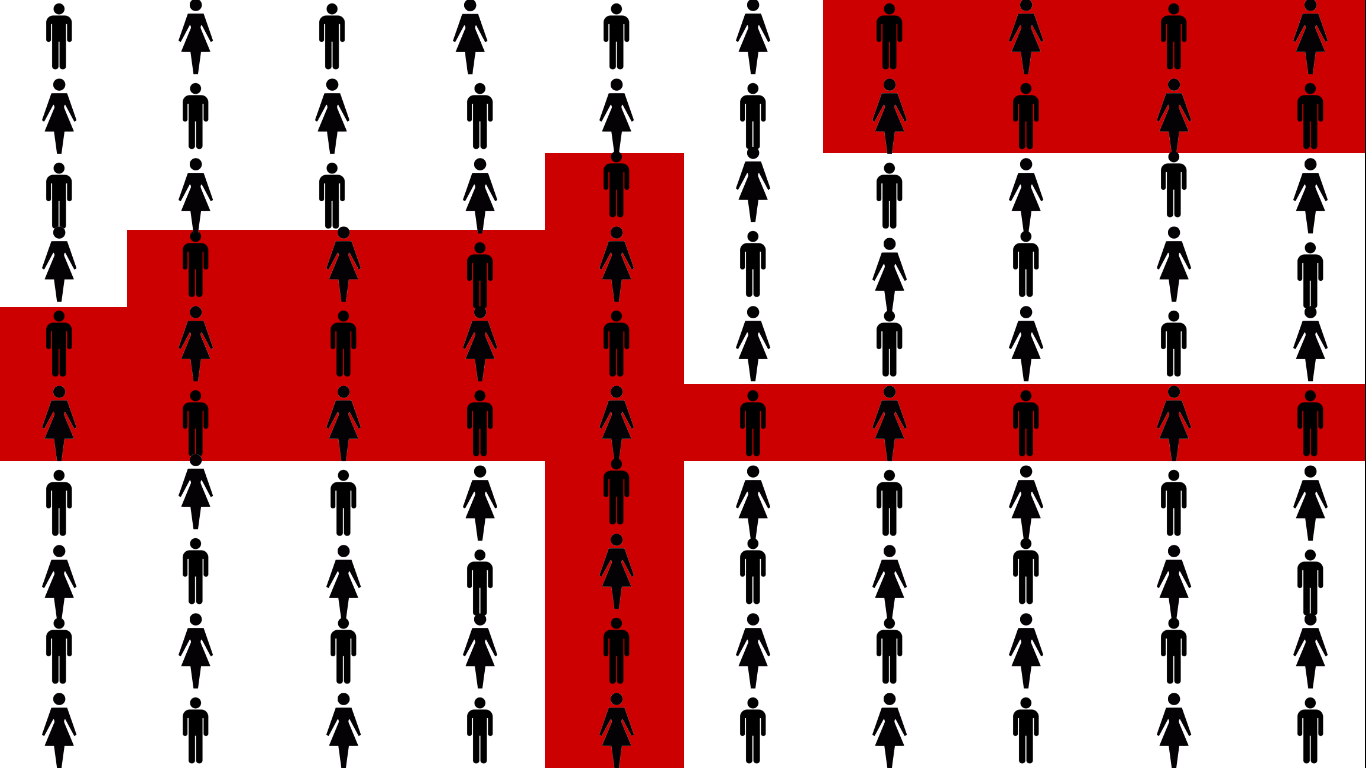 About 1/3 of a hospital's population lives in red. That’s a lot, but it makes sense, since hospital inpatients are sick or injured, both of which are significant risk factors for developing delirium.

Not everyone is delirious at the same time. Some are admitted in a state of delirium (quick question - what’s the #1 reason for ER visits by the elderly?), others develop delirium during their stay but it’s resolved before discharge, while others are still delirious when they're discharged home or to a facility.

Let’s assess the group in a facility, specifically a skilled nursing and rehabilitation center for people who require additional care and treatment, like following a hip replacement. 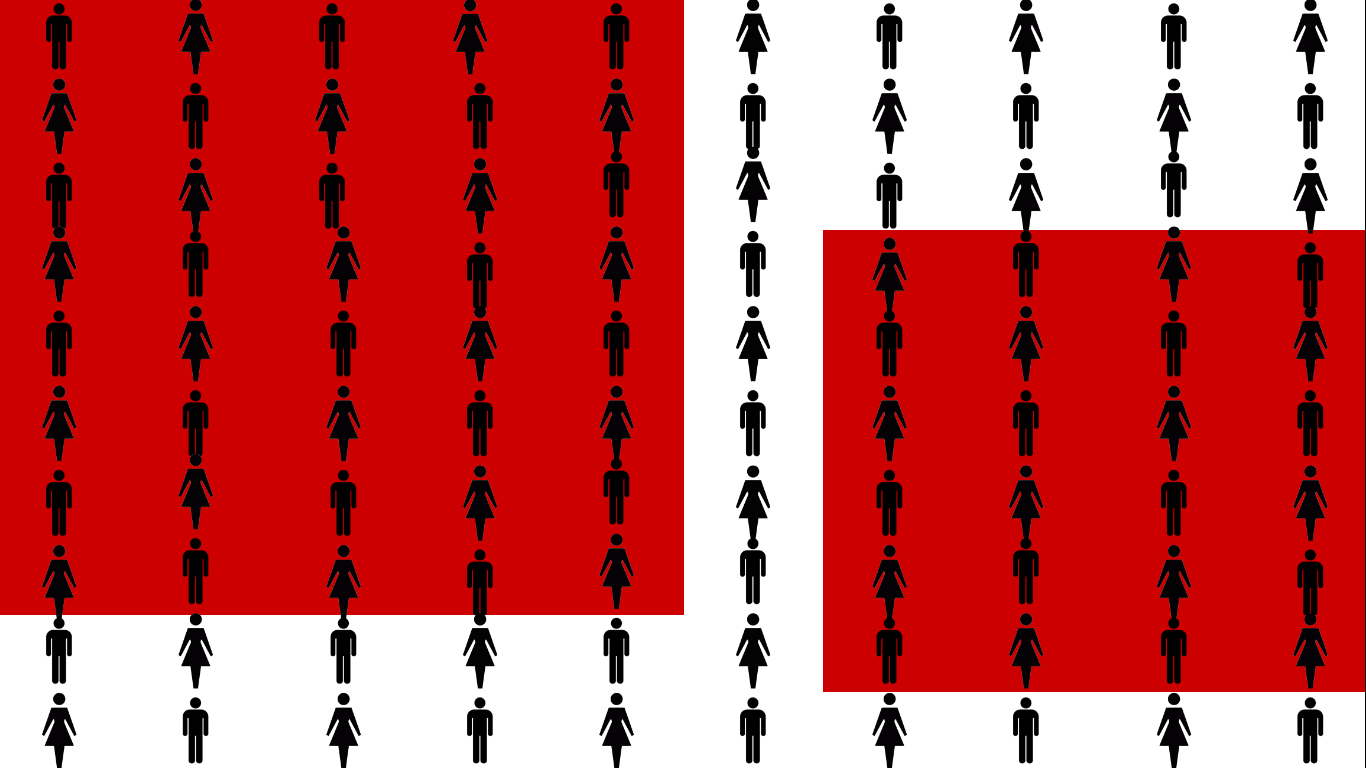 That’s 2/3, a clear majority! Why? People are transferred here from the hospital, where about a third develop delirium, including those who were still delirious when they were discharged.

Our next stop is the intensive care unit (ICU). 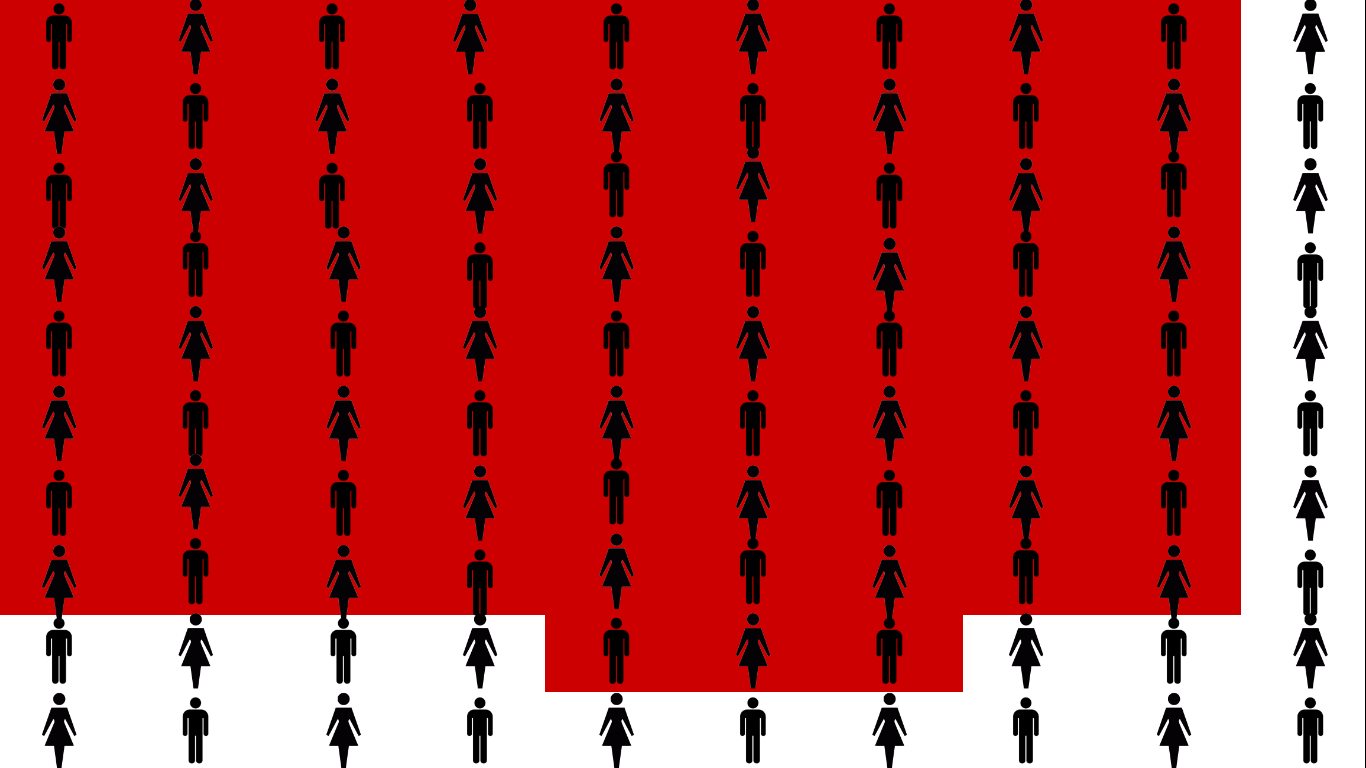 Delirium affects 75% of these, the sickest of the sick, because they’re given the most, and most powerful, medications, and are cared for in the most abnormal and disruptive setting of all.

There’s one last place for us to explore - end of life. 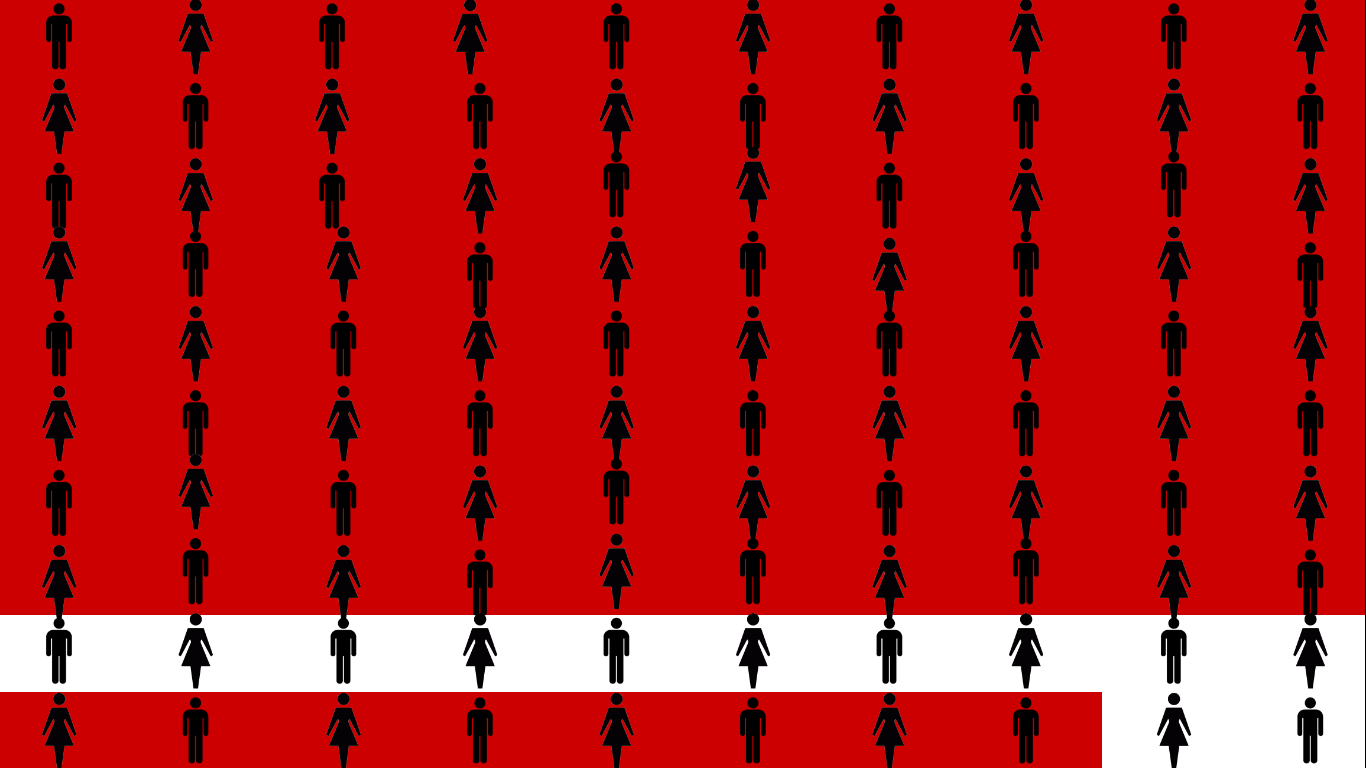 Which brings us to our Top 5 list of things every hospice clinician should know about delirium:

#5 - Expect delirium in every hospice patient. Delirium is a medical emergency. Over 85% of people at end of life experience delirium, so assume delirium is present until your assessment proves otherwise. Delirium is a deeply distressing symptom for patients and families. It undermines important goals at end of life, including comfort and meaningful interaction with family. 4, 5

What the hell, I'm gonna go with "Death Nurse." 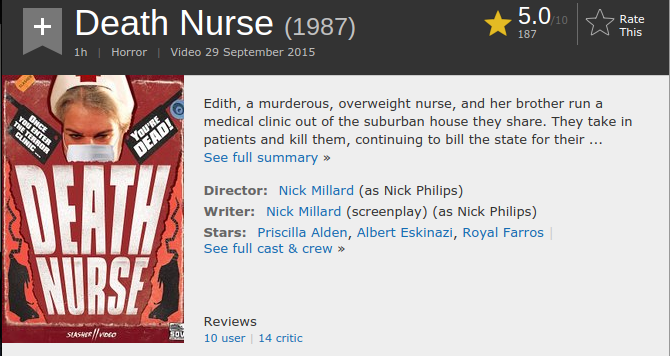 I’m using my experience in nursing and end of life to build a business, and after much thought and several minutes with Google decided to name it, “Death Nurse.”

A few of the few people I’ve told so far have been horrified, beginning with the lawyer.  She said it would scare off patients and families who could be potential clients. One colleague said it played right into several bad caricatures, while another just shook her head.

The ideas at the heart of this business have been percolating in my mind for at least the past 15 years, probably longer. I’ve been a nurse for over 40 (!) years, and always worked in high-mortality settings - hemodialysis, critical care, and hospice.

In mid-career I kept my RN current while selling application software, mostly to large pathology departments at academic medical centers. I really liked working with that group of physicians.

You know, the ones who do autopsies.

My personal encounters with death started early, thanks to a culture that didn’t think twice about dragging an entire first-grade class over to the convent, to pray the rosary in French while stuffed into a tiny room with several other grades, two radiators, no windows, and a dead nun.

I value this work. I enjoy it, am challenged by it, and still learn something and/or meet someone every time I turn around.

Patients and families need more and better from us, not less: from supporting simple advance care planning and basic community education, to guiding them through overly-complex health systems - both care and financial, to helping them articulate and achieve EOL goals that really matter.

Boomers are getting old, sick, and dying. It’s a demographic wave and the surf is most definitely up.

A “good death,” however defined, doesn’t just fall from the sky. As clinicians, we need to keep expanding our knowledge and raising the bar on our practice. We’ve got to give each other the kind of care and attention we provide to patients and families.

It’s also long past time for the community to step up. Joining a walk-a-thon or donating a watercolor to the annual auction are both well-intentioned gestures, but they’re also dollar-focused and low-effort, even passive, and underscore the community’s subservience to an agency, which most agencies no doubt prefer, when power in the relationship should flow in the other direction.

I believe that the real changes we need in care, both for advanced illness and at end of life as well as for the broader system, will come from patients and families, not from us, and certainly not from any system where we might be employed.


That kind of change starts with consumers who are truly knowledgeable and able to make informed choices.

At one point in my planning, a friend’s guidance led me to develop what I thought was a clever 3-step strategy to achieve this vision for a better world: Awareness, Education, and Action.

I was convinced, “If people know about x, y, z, they’ll realize the need to learn a,b,c, so they can take control and blah-blah-blah. And I can help.”

My old Uncle Ernie had a saying about revelations: “A moment to utter, a lifetime to try and probably fail.”

I’m not giving up. I’ve barely started. Some of what I’ve tried so far has gone well, some less so, some even less so, and some other still worse. There are plenty more ideas bubbling but untried, so I don’t expect many dull moments, though probably a few dead ends.

But if I’ve learned anything at all so far, it’s that it simply isn’t possible to promote awareness, education, and action without first getting people's attention.

So, yeah, I’m going with, “Death Nurse.” We’ll see what happens from there. Now I need to work on a logo and business cards.
Posted by Jerry at 2:19 PM No comments:

Until I can really get started here...


...maybe check out my old-school blog, Death Club for Cuties.
Posted by Jerry at 10:40 AM No comments: