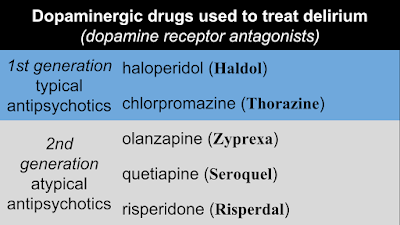 Who's the new face?

A few people tried talking me out of the name 'Death Nurse' for my plans to develop a practice based on working with clinicians, caregivers, and the community around the challenges of serious illness (the term currently used in place of terminal or life-limiting illness) and care at end of life. Their comments made me pause, briefly, before plunging ahead.

They were aghast at my old logo. I admit it was a bit stark, with the black background, sinister grin, and fat red cross. Such are the limits of clip art.

Just as I've gained confidence with the name as this venture rolls along, I've also become more comfortable with the idea of playful images and graphics. I would not have considered doing some of my own illustrations a year ago, but now I've got a set of colored pencils!

If death and dying is "hot" right now, graphic medicine is even hotter.

As for the nurses cap: some nurses have been upset with me about that, claiming it feeds an outdated stereotype. I haven't actually seen a nurse wear one in years, but when I was in a hospital-based diploma nursing school from 1973-76, they were very important.

I never wore one myself, but getting the cap in the second half of our first year, after almost half of our classmates were dropped from the program, was a BFD, a sign that we really were on our way.

Also, too: every program had their own cap design. Some looked pretty silly to me, like cupcake wrappers or weird origami. But there was never any doubt that the person wearing it was a nurse.

I guess today, the nursing cap has been replaced by a Littmann stethoscope draped over the shoulders. But docs do that too, so how to tell the difference? (Hint: nurses generally go for the $50 Select, or maybe the $100 Classic III).

Also, too: no shoulders on a skull.

The only decent piece of nurses cap clip art I could find for that first logo had a big fat red cross on it, and I knew it could eventually attract undesired attention from the organization of the same name. So, drawing my own skull also gave me the freedom to choose something else, or nothing at all.

The plain white cap just didn't look good, and risked confusing visitors - was the skull a sailor? a baker? some functionary in a religion that liked silly hats?

I settled on the Celtic knot called the "triquetra,"or "triangle." It's said to represent the Holy Trinity of Christian belief, as well as the interconnection of all life and the universe, and is often depicted in green, the color most associated with both life and Ireland.

Also, too: Jeanne was born a Murphy, and was proud of her heritage, so...
Posted by Jerry at 7:22 AM 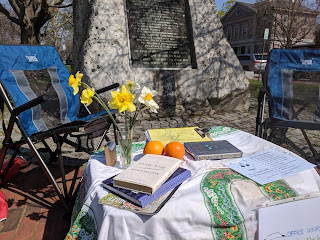 The Death Nurse is IN!

I've never been a fan of Anjezë Gonxhe Bojaxhiu, aka Mother Theresa (MT), and am more inclined to the view expressed by Penn and Teller. Still, she's the essential character in a joke that's important to my thinking:

A wealthy executive suddenly decides his life has no meaning. He sells his expensive homes, cars, all other worldly goods, and liquidates his investments. He takes the money to India and approaches MT saying, "I want to work with you here among the poor."

She squints suspiciously and hisses, "Find your own Calcutta."

I had a similar thought when a physician friend excitedly told me he was traveling to a country in Central America for two weeks to provide health care at a children's clinic run by a religious organization.

"Why go so far?" I challenged. "There are plenty of kids who need primary care in any one of several nearby towns and cities."

He said he much preferred the idea of a trip to Central America. I didn't press it.

I've long believed that care for serious illness and at end of life is most often best experienced within a patient's and family's community, and best provided by others in that same community.

It's the logic that leads some hospices to develop programs that meet the special needs of communities they serve, like non-English speaking patients and families. That level of effort goes beyond simply acknowledging the importance of culture, or even helping staff expand their understanding of other cultures and communities.

I used to tell my kids we lived in 'Bubble Town,' a place of affluence and privilege in the part of Massachusetts tagged, "Leafy, Liberal, and Loaded." We're not immune to many of the challenges other communities face, but in general things are good around here.

Some folks might say my Calcutta is pretty sweet. They wouldn't be wrong. Money helps.

Still, serious illness and end of life don't respect borders or checkbooks. Death comes to Bubble Town as readily as every other, and being a resident doesn't automatically prepare one to cope more effectively as a patient or caregiver.

So, here is where my shingle has been hung - the Death Nurse Open Office.

The Open Office idea came from a couple of sources. I was inspired by Mona Haydar's action, 'Ask a Muslim,' and also by Lucy Van Pelt's 5-cent psychiatric help stand from the comic strip, 'Peanuts.'

Identifying a location was easy, as there's only one designated for the purpose of setting up a table to distribute information. Fortunately, it's a very visible and high traffic spot for both cars and pedestrians.

It's also located right across from a picturesque Colonial-era hillside cemetery. 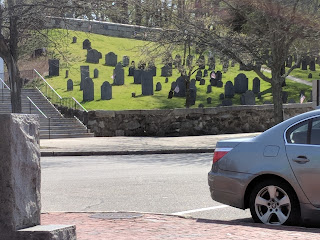 View from the Open Office

The mechanics took a little longer to figure out.

The Open Office had to be portable, and easy to set up. I didn't want to use my car, and though not an avid bicyclist I decided to explore whether loading the Open Office onto some kind of bike trailer made sense. That led me to Bikes at Work. 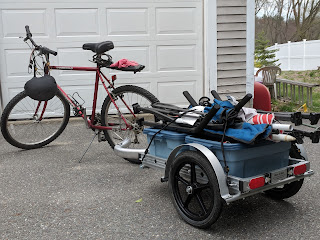 The rest easily fell into place once I settled on this basic approach. I bought two folding chairs at Costco, and already had two Rubbermaid storage bins that fit perfectly on the trailer, along with a beach umbrella. All of the Open Office stuff goes into the bins, the chairs and umbrella secured on top with heavy duty bungee cords. I decided against a table - too much extra weight, and the storage bins sitting on the trailer come up to just the right coffee-table height to match the chairs, and look pretty spiffy covered in a bright tablecloth and topped with a vase of flowers, as evident in the photo at top.

I developed a simple handout that doubles as notepaper. My logo and contact information is on the front, along with plenty of space for writing or doodles. The reverse includes a list of books - basically the pile I wrote about a few weeks ago, plus Roz Chast's memoir, "Can't we talk about something more pleasant?"

I'm developing a basic brochure about advance care planning, but it's not ready yet. I also have a healthy supply of the Massachusetts Health Care Proxy for anybody who needs one. I'm developing my own ACP brochure because I don't like any I've seen so far, and also - branding. I'm approaching this venture with a particular attitude, and want the materials to reflect that.

I had no great expectations for the initial Death Nurse Open Office Hours  last Thursday - I intentionally didn't publicize it because I first wanted to see how it all came together. It was sunny and hot (note to self - sunscreen!), and there were plenty of folks out doing their business. I spoke with seven (7) different people over the course of 3 hours. None of them were looking for any specific information. Several were simply curious to see me sitting there, and wanted to know more. Three shared their experiences - a man whose mother in law donated her body to a medical school in Colorado; a woman who was caregiver to her mother; and a couple who proudly told me that they had "everything taken care of."

I'm committed to holding Death Nurse Open Office Hours through the coming months and into the Fall, when an Open Office should probably move indoors. My plan is to maintain the schedule of 10 am to 1 pm each Thursday, though I expect it may be necessary to pick a different day every now and then.

I also hope to hold Open Office Hours in the adjacent town of Carlisle, where I used to live before moving here. It's a tiny town with not much of a center, but there's an awesome ice cream stand that strikes me as just the right spot.
Posted by Jerry at 9:33 PM