If you work in hospice, and someone asks you about it, what's a good way to respond?

If you know nothing about hospice, but wonder about it sometimes, where can you go to find out more?

If you've had an experience with hospice, and wonder about other people's, how can you compare?

I think the answer to these and other questions starts with a visit to the websites* of award-winning photographer Ross Taylor, for his 2002 photo essay, "Gloria's Goodbye."

"One night, while she was getting treatment, Gloria looked up to me and told me how much she cared about me, and how much doing this story meant to her. We both cried alone in her bedroom; it is a moment I will never forget. I always want people to know this part of her tenderness when seeing these images, especially the ones around her decline and death.”

Blog sez check it out.

* Taylor has both a dot com and a dot net, and there seems to be a slight difference in the versions of the story. I like the one at the dot net site.
Posted by Jerry at 8:21 AM

Something else about delirium, part 2 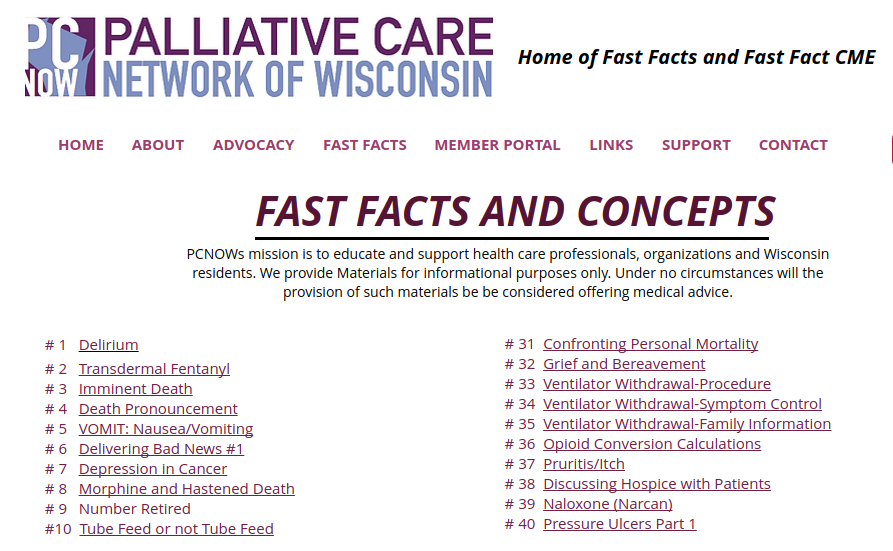 Every clinician working with patients and families facing advanced illness and at end of life must understand delirium. We already know to expect it, because that’s #5 on the Top 5 List.

Delirium, dementia, and depressions, “the 3Ds,” are frequently encountered in life-limiting illness and at end of life. Older patients are particularly vulnerable. A recent study found that nurses had generally low knowledge of the 3Ds, and were not able to effectively identify, differentiate, or intervene when one or more of the disorders affected their patients. 1

The clinical presentation of delirium varies widely. While many clinicians most often think of delirium as a state of extreme agitation and hyperactivity, the hypoactive and mixed forms of delirium occur more frequently in older patients. 2

I’ve been lucky to work with physicians who understand palliative care and hospice, but if any at your agency need to be brought up to speed on any topic, grab this link and make sure they do something with it. It could be the most important contribution you ever make to good care.

#4 - Know what delirium is. A simple definition says it best - delirium is present when, “a patient’s ability to receive, process, store, and recall information is impaired.” 3

Sing it to me 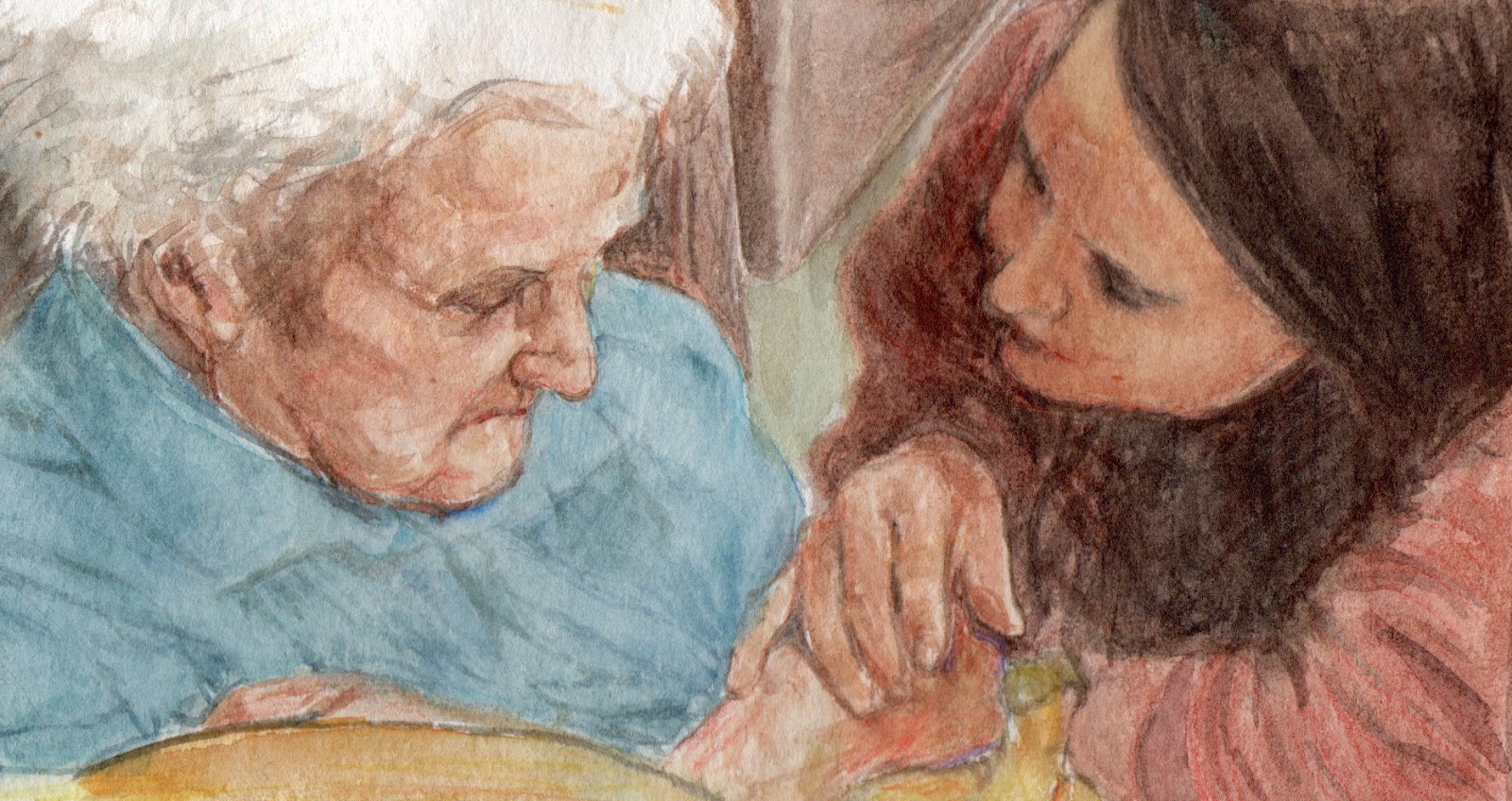 I just delivered another script to Adam, the fellow I met on Fiverr who is doing the voiceover work for a series of instructional videos on caring for patients and families with advanced dementia at end of life.

This latest installment explores ways to connect with someone when their cognition is absent, or severely compromised.

We often fail to appreciate how normal cognitive interaction is no longer possible for someone with advanced dementia, like having a conversation based on questions and recollections.


Writing for TheAlzheimersSite, Elizabeth Nelson likewise details the consequences of our failure to adapt to the needs of those with dementia in its earlier stages.

I’m working with an artist to help inform the video’s content and convey the stories more effectively. We want the material to have the look and feel of a children’s book, to put people more at ease in the face of what can be an emotional and difficult topic. The image above is our attempt to express the idea of advanced dementia realistically, but also in a way that is less threatening or disturbing.

Singing is one reliable way to connect with someone who has advanced dementia, and for some reason when we do, we often reach for, “You are my sunshine.”

The melody can be soothing or spirited, but the lyrics are always heartbreaking. Here’s a version that really floored me.

Would YOU attend this in-service?

I’ve been working on some educational content for an agency that cares for patients and families with advanced dementia, in response to regulations from the Massachusetts Department of Public Health requiring eight hours of dementia-specific staff training.

As these folks helpfully explain, “Previously, nursing homes and other facilities were technically permitted to advertise their services as specializing in dementia care, even though their staffs were not appropriately trained…”

Jeanne had a mantra about teaching that was the foundation for everything she tried to do in classroom and clinical settings:

My project colleagues and I have explored different ways to develop, package, and present the material. Our goal is to enhance skills and understanding, and support the kinds of sustainable positive changes in staff behavior that lead to higher quality service, and result in better outcomes for patients and families.

Videos are an important part of our model.

I’ve been critical of what passes for “continuing education” in health care for about as long as I’ve been a nurse, because I’ve been forced to endure more crappy programs and “death by PowerPoint” than I can count.

I’ve tried watching in-house videos with low production values featuring presenters more suited to print, or who would benefit from simple coaching. But it usually takes just a minute or two for me to want to jab large knitting needles into my eyeballs.

We plan to award contact hours to the nurses who attend these programs, so I’ve also been working on the detailed application for approval by our state ANA chapter. The application guidelines include specific language required to disclose information about earning credit, along with any conflicts of interest or commercial support.

I first recorded my own narration for this and the other video elements, but still wanted to reach for the knitting needles. I thought a woman’s voice, speaking with a British accent, would be much better.

Someone told me about Fiverr, where I found the perfect person (voice).

I told a friend about my plan. She replied, “Use a man’s voice,” and made a compelling case that quickly won me over.

Here’s a version of what will be included at the start of each video, once they’ve been approved to award nursing contact hours. I think my friend was right.

A death I nursed

The first serious discussion we ever had was about death.

One Saturday night in early October, 1975, my best friend’s father died suddenly at home. Jeanne was the head of my third-year nursing program, and on Monday I told her I would be absent for the rest of the week, missing three full clinical days as well as another day of class.

It was right at the start of a full curriculum in a tight schedule, and I expected her to object. But instead, Jeanne listened, asked what else I needed, and said not to worry, that we’d find a way to make up the lost time.

One year later, my casual visit to the school as a newly-minted RN led to more conversations and, later, a date to watch the Boston Ballet. Things happened, and we married in 1981.

Fast forward to January, 2016 - our final approach to Jeanne’s end of life after five years of Alzheimer’s. Here was the time to apply everything I ever learned in classes and clinical settings.

We often talked about death in those intervening years. Not morbidly or obsessively, but simply because we shared a profession and benefitted from each other’s perspective.

We supported each other as we lost family members and friends, and made sure to say, “Please, don’t ever do this to me when I die!” whenever we saw something we didn’t want for ourselves - embalming and an open casket, a funeral in a church, a line of limos in a crowded cemetery by a busy highway, dove-shaped balloons, tension.

We had conversations about advanced disease and our preferences for care - usually in the context of someone else’s illness, and again often provoked by what we saw, personally and professionally. “Please don’t let them do this to me if I’m ever that sick!”

Our plan of care in Jeanne’s final years was straightforward, with simple goals based entirely on what was important to her, and on what she wanted: to be safe, comfortable, and content at home, where she could be dignified and loved.

We met our goals.

It was the last, most critical test we ever faced. I can’t remember if it was easy or hard. We were just trying to make the best of a bad situation. But for me, as was the case in all the rest of our lives together, it was really a matter of keeping up with Jeanne.