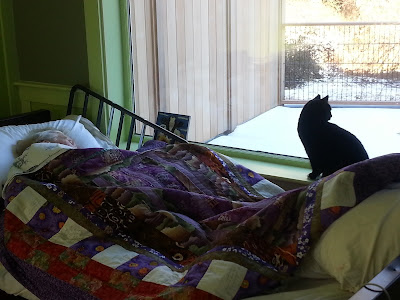 Jeanne and Kia earlier that week

She was in bed for eleven days, and until the day before engaged in ways I hadn’t seen for years. Her cognitive impairment disappeared. Terminal lucidity.

Our home was a special care unit for a single patient with an on-site staff of three and the support of a well-established non-profit hospice agency from an adjacent town. I started sharing caregiver duties in September - first with our daughter, and then a private caregiver - both capable, compassionate, and essential. Hospice joined us mid-November.

We told friends and family Jeanne could no longer receive visitors. Time awake was infrequent and unpredictable in the company of a very small circle, all directly contributing to Jeanne’s care, and ours.

We had an awesome aide from hospice, and the rest: nurse case manager, back-up nurse, social worker, chaplain.

They left, and we lowered the head of Jeanne’s bed for routine care: turn her to a new position, check her skin, make sure the inside of her mouth was moist, etc.

Ease back onto her pillow, unfocused stare, slipping away.

The funeral director and assistant place Jeanne in a body bag and onto a stretcher. I follow to the driveway, watch them slide her into the same discreet black minivan we will use for the trip to Maine. They drive off.  I bow low, and go back inside to figure out next steps with the kids.

Early Sunday morning my daughter and I drive to a large commercial greenhouse for two buckets of freshly-cut lilies. I've been buying flowers grown here for the past few years. Jeanne loves them, and I'm mindful of something my mother often said, “Bring me flowers while I’m alive to enjoy them.”

I break down completely at the greenhouse on Friday, starting to explain why I'm there. They respond kindly. I leave feeling relieved and saddened.

To the funeral home. The director and assistant waiting with Jeanne’s body.

She's dressed in a kelly green t-shirt with a small guitar on the front and the phrase, “Shamrock on;” navy blue slacks; a pair of cream colored socks decorated with the birds we enjoyed watching in our backyard - black-capped chickadees, blue jays, cardinals, yellow finches; a navy blue cardigan sweater with tiny white stars and a small round pin, “I am loved.” The pin was given to Jeanne on Valentine’s Day two years earlier at the adult day care program. She wore it almost every day.

We place her body in a linen shroud, wrap and tie it closed, cover her with a special quilt, and slide the flat wooden stretcher into the discreet black minivan. The assistant bundles the lilies in the shroud’s former wrapping paper, places them to either side, and closes the door.

I drive, my daughter rides shotgun. The funeral director and assistant follow in one car, my son and his wife in another.

We're joined  at the green burial ground by the caretaker, Gary.

My son, daughter, daughter in law, and I remove the quilt and carry Jeanne’s shrouded body to the freshly-dug grave. We lower her gently onto pine boughs lining the bottom, surround and cover her with lilies.

Now, the most difficult and important part - leaving. Gary will care for her.

A few days later, at the funeral home paying the bill - just under $5,500. I hand a check to the assistant, and ask for Jeanne’s wedding ring.

Blank stare, then adamant, “We gave it to you at home.”

Call the funeral director. “We follow a strict protocol with jewelry. We tag it, bag it, and keep it in a safe until it’s returned to the family. Jeanne’s ring isn’t in the safe.”

Silent curse - why didn't I just take it off at home myself in the first place?

I leave, unsatisfied and angry.

Another quick exchange with the funeral director. “Several searches,” he insists. “We gave it to you at the house.”

Consider everything that can go wrong, or could have. This lost wedding ring seems trivial.

I don’t think the funeral director or assistant stole Jeanne’s ring. That would be petty, and discouraging. But, what happened?

When they left our home, did they really bring her back to the friendly local funeral home?

Or, did they head over to a light industrial/warehouse district just off the interstate, filled with nondescript buildings we pass without a thought, including one where armies of technicians working around the clock process dead bodies for some large heartless corporation?

I know that might sound a little crazy, maybe a little too much like the climactic scene in Solyent Green (***spoiler alert*** Solyent Green is people).

I guess it does sound that way when I read it out loud. But the contemporary funeral industry has always creeped me out. It’s dark, secretive, and pernicious.

I don’t have specific evidence, just intuition, childhood memories, every episode of Six Feet Under, news reports about companies playing in that sandbox (gravesite?), and some important work by the good guys.

But it’s the only way I can get my head around the lost wedding ring.

I think Jeanne was brought to a nondescript building somewhere off the interstate, where the ring was promptly found and pocketed as she was un-bagged and passed down the assembly line, or lay at a station. I think she was washed, dressed, and stored there until some time before Sunday morning. I think the friendly neighborhood funeral home is one of many operating this way. There is no friendly neighborhood funeral home. That's the creepy secret.

It came to me in a vision - “Economies of scale.”

One other thing - in addition to leaving the house wearing her wedding ring, Jeanne was dressed in clothing from LL Bean and wrapped in a pretty good quality contoured sheet. The funeral home’s bill included no entry for laundering soiled items. They had no biohazard bag waiting when I stopped by with the check, no inquiry, “Do you want these back?”

It seems to me the funeral director or assistant would have made such note, had they done anything more than drop her off and pick her up some time later, ready to go.

since feeling is firstwho pays any attentionto the syntax of thingswill never wholly kiss you;wholly to be a foolwhile Spring is in the worldmy blood approvesand kisses are a better fatethan wisdomlady i swear by all flowers. Don't cry—the best gesture of my brain is less thanyour eyelids' flutter which sayswe are for each other: thenlaugh, leaning back in my armsfor life's not a paragraphand death i think is no parenthesis

Comix for the weekend

Here's a 5-minute video about the foolish reasons some drugs get a bad rap, and what we really need to know about giving them.
Posted by Jerry at 12:08 PM No comments: 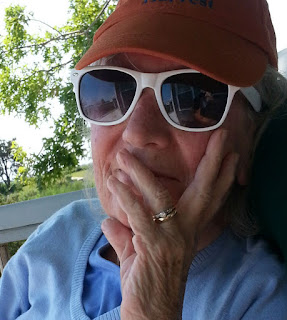 Never let an undertaker get his hands on the jewelry...

I've avoided one topic ever since I started writing this blog, and even before. That's because whenever I think about Jeanne and our five-year toboggan ride with Alzheimer's, I like to remember the best moments, things we did right, and all that went well.

We were fortunate in many ways, the most important being Jeanne's lifelong inner beauty. We also had resources - money, motivation, knowledge and understanding, friends, family, and a professional network to draw upon, along with a clear goal - for Jeanne to be safe, comfortable, and content in our home, where she could be dignified and loved.

We were also successful, if that's the right word to use here. We achieved our goal.

There were bumps along the way. Some aspects of Jeanne's clinical presentation were difficult, most notably complex partial seizures that resulted in several terrifying falls. The good news is that her neurologist was diligent and kept Jeanne's seizures under control, especially through our final year.

We lost a few friends - people who couldn't adjust to our new reality. But we also built an amazing team of people who more than understood: they helped us through it.

The result: our ride ended without us smashing into a tree. We managed to stay on, and came to a quiet stop on flat ground.

So, why bother about anything that didn't go well?

My thoughts returned to something that went badly after Jeanne died when I read an amazing essay by Amy Cunningham, "Must it stay this dismal?"

I took on every aspect of Jeanne's care as her disease progressed, often as a caregiver, always as a care manager. I saw it as the best application of my education and experience.

"Nobody knew her better or loved her more." Something to remember the next time someone tries telling you, "Stop being the nurse so you can be the (insert relationship here)!"

I also took advantage of every available opportunity for help. But when I thought about "what to do" between the time Jeanne died and the time she was buried, I just couldn't contemplate the details, or even the general idea, of keeping her body at home.

Jeanne provided some guidance at various times during our 40 years together. "Don't keep my body around," was one frequent instruction. "Don't spend a lot of money," was another.

With these and other admonitions in mind, I made an appointment at a friendly local funeral home sometime in the summer before Jeanne's death, and described my plan:

They would pick up Jeanne at some point following her death. Her body would be washed and dressed, though not embalmed, and kept for the day or two needed for a death certificate, burial permit, and having her grave opened at a green burial ground in Maine.

I had already purchased the plot - two plots, actually. One was for Jeanne, and the other seemed like a good investment. It was an old joke between us.

I had also purchased a linen shroud with an insert of dried Bay Laurel leaves, in keeping with the green burial aesthetic. I knew what I was going to do about flowers.

We agreed that on the day of the burial, my daughter and I would come to the funeral home to wrap Jeanne in the shroud and place her into their discreet minivan. We would also drive her the 200+ miles to the burial ground, while the director and an assistant followed in another car.

By my accounting, I would end up paying about half the median cost of a funeral and burial in Massachusetts. We only needed a few services, and I expected mileage to be the costliest.