I remember the day 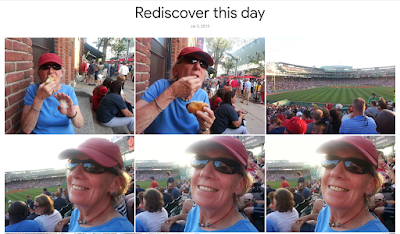 We went out to the ballgame...

Google reminded me about 2013 this morning, but didn't really have to. I remember it well.

I started my last full time regular nurse/employer gig in February, as the hospice staff educator in a nurse-run home care association. The association model is your basic group practice, in this case with nurses instead of dentists, accountants, lawyers, or physicians - though somehow the nursing group practice model is required by law and regulation to have a physician medical director on board, and the nurses can’t really do anything themselves without some physician first saying do it - or at least anything they’ll get paid for.

The association had tacked-on hospice care at some point in its history, and a few months before I was hired had acquired the home care and hospice ‘business’ of the local university medical center. It was pretty much a merger of equals from what I could tell, based on staffing and census. And of course it was a chaotic mess.

Back to the 2nd of July.

A hospice RN case manager in one of the offices asked if I was interested in a pair of Red Sox tickets for the next night’s game. She had grown up the daughter of a fan dad, watching together through the long season whenever the games were on TV, and listening on AM radio whenever they weren’t.

Her dad had died the year before. They had been season ticket holders since before the Red Sox won the World Series for the first time since 1918. She would never give them up, but knew she couldn’t go to every game. She was, as you would expect, a terrific hospice nurse.

I snatched the tix, a night on the town for me and Jeanne before we joined her siblings by the seaside for the holiday. I also worked out the final details for my July 3rd work day with the music therapist. She had four visits scheduled, including two in facilities and one in a home where the final trajectory was… trajecting?

I’ve treasured the few opportunities I’ve had to be with music therapists as they do their work, to watch and listen to what they’re doing, and to what happens all around when they do it, and to me. They add to IDG. I think a lot of people don’t fully appreciate who music therapists are, or what they bring to patients, families, and the rest of the team.

First - I love a good hootenanny, and can bite my tongue through endless choruses of ‘Michael, Row the Boat Ashore.’ I especially love lounge singers at senior facilities, crooning and scatting to karaoke Frank and Ella. Music and flowers make us smile, touch the deepest parts of our brain different from cognition.

That’s not what music therapists do, as I understand.

Well, they know a lot about the deepest parts of our brain, and they certainly know a lot about music. But the basic path for a certified music therapist is as rigorous as any clinical discipline I’ve ever seen, and quite a bit more than some.

More about the music therapy program at Berklee.

Anyway, it was about 8:30 when I rolled into the dank cubbyhole of my office where the music therapist and I had planned to meet at 8:45, and the phone rang before I put down my bag. It was my nominal boss, the director of the association’s education department.

“What’s your plan for today?” she asked.

“I’m meeting up with the music therapist. We’ve been talking about doing joint visits for a while, and since today’s pretty quiet around the office…”

She cut me off. “No, Annabelle already told her you won’t be joining her. You need to work on the orientation manual.”

Annabelle was a nurse manager who had a long association with the… association. A lifer who before had been a lifer in the Army, she frequently reminded everyone how she was counting off the remaining days to retirement number two with a chain of paper clips. At the end of each day, one less paper clip. She usually flipped it at a secretary.

“That’s bad luck,” the secretary told her. “You’ll die before you retire if you don’t stop doing that.”

Annabelle still took the managing part of her nurse manager role seriously, and applied herself diligently to prying into the lives and activities of anyone within earshot, and interfering however best she could. Apparently the day before, maybe even at about the same time I was exchanging money for Red Sox tickets with a colleague in one office, the music therapist had casually noted to another colleague in another office that she and I were doing joint visits.

Annabelle overheard, and the rest is history. She lit up, then the phone line to my nominal boss lit up, and at the end of it all I spent a few hours in the dank cubbyhole sifting though milk crates full of 3-ring binders of outdated policies and procedures.

Jeanne and I drove in to Brookline, and parked the car at a secret spot in my old Coolidge Corner neighborhood. It’s a straight shot from there down Beacon Street to Kenmore Square and Fenway Park.

Every picture tells a story, so please enjoy whatever pictures catch you, and listen. The day is now.