Case Study: Bullying behavior by physicians - cause or effect of nurse passivity? 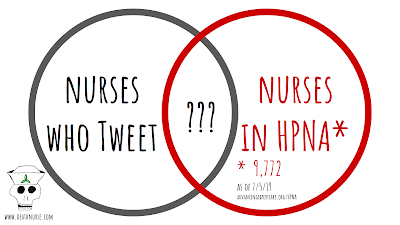 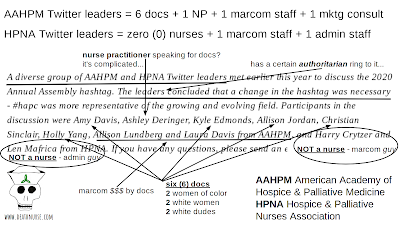 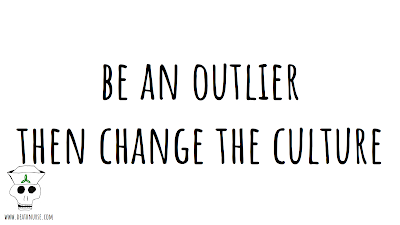 figure 3 - the solution starts with each doc & nurse

The problem is a physician culture perverted by power and privilege.

The problem is a nursing culture perverted by powerlessness and passivity.

Find the sordid details from my earlier post, "This is f'd up in too many ways to count."

Read the official details at AAHPM.

Read the official details at HPNA...Oops, sorry, nothing about it on their website.

This case is both superficial and deeply disturbing.

It’s about a hashtag for a conference, and not a very good one (I mean the hashtag. The conference is awesome, been twice!)

It’s about the toxic dance of bullying behavior and passivity, and it stops now.

We need to reverse the power dynamic.

Doctors as a group need to give it up.

Nurses as a group need to take it, along with pretty much every other clinical discipline and non-physician ‘team member.’

This isn’t a petty gripe.

This is the tectonic shift we need to get power back where it belongs - in the hands of patients and families.

"How do you recognize that gaslighting is happening?

Take a look at the list below. If any part of the list resonates with you, you may be involved in a gaslighting relationship and need to look further.

While all of these symptoms can occur with anxiety disorders, depression, or low self-esteem, the difference with gaslighting is that there is another person or group that’s actively engaged in trying to make you second-guess what you know is true. If you don’t typically experience these feelings with other people but do with one particular individual, then you might be a victim of gaslighting."

Turning Up the Lights on Gaslighting
by Kate Abramson, Indiana University
in Philosophical Perspectives, 28, Ethics, 2014

"...the phenomenon that’s come to be picked out with that term is a form of emotional manipulation in which the gaslighter tries (consciously or not) to induce in someone the sense that her reactions, perceptions, memories and/or beliefs are not just mistaken, but utterly without grounds—paradigmatically, so unfounded as to qualify as crazy. Gaslighting is, even at this level, quite unlike merely dismissing someone, for dismissal simply fails to take another seriously as an interlocutor, whereas gaslighting is aimed at getting another not to take herself seriously as an interlocutor. It almost always involves multiple incidents that take place over long stretches of time; it frequently involves multiple parties playing the role of gaslighter, or cooperating with a gaslighter; it frequently involves isolating the target in various ways. And there are characteristic things gaslighters say: indeed it is remarkable how much overlap there is between phrases that Gregory uses in the movie, and the sorts of proclamations that are made by gaslighters to their targets in real life."

Nurses and doctors: Pick one or more from the following to supplement your new understanding

Nurse Expert Advice: How To Deal With Doctors Who Bully
from nurse.org

When the Bully is a Doctor
from the New York Times

Now a little reward for scrolling to the bottom...

David Bowie died just a few days before Jeanne. That enormous coincidence led me to develop a special devotion to David Bowie in the same way my departed catholic mother in law developed special devotions to a long list of saints and other religious figures.

I told this to a nursing colleague once, and a little sheepishly. His response? "At least David Bowie is real."

Well, to some. It's really a matter of faith.

David Bowie will always be helping me grieve, and here's a particularly inspirational service at a YouTube shrine of his.