Peeking up from the rabbit hole... 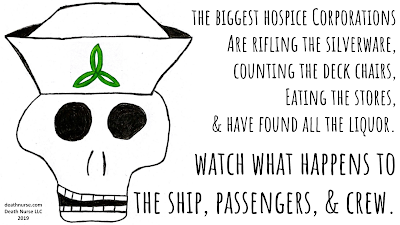 After getting that fateful call from a colleague (Part 1 Part 2) I've been researching what's happening here in the Commonwealth ("God save it!") with regards to hospice, and it's brought me into the murky world of private equity (PE) investing in corporate mergers and acquisitions (M&A), a place where MBA's armed with algorithms and hubris confidently predict to rich people and others with big money that they can become even richer and bigger by investing in their schemes.

They are masters of the universe.

Here's the most current list I could find of the one-hundred biggest US hospice corporations, companies, agencies, and other players. I've highlighted the first 10. Ranking by LexisNexis: 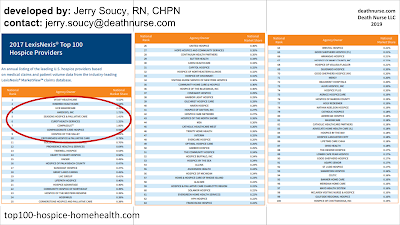 Yeah, that's not so helpful. Let's really focus on the ten biggest players in the nationwide hospice sandbox, based on their percentage share of a total national market: 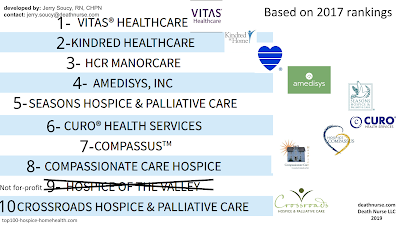 I've crossed-off #9-Hospice of the Valley because as a tax-exempt not-for-profit agency, they're not relevant to our current discussion.

But, since they're non-profit we can easily review Hospice of the Valley's financial and operating information by looking up their IRS Form 990.

I'm going to estimate each percent of market share at $150M, just because. You can go higher or lower.

Two significant deals have gone down since the LexisNexis list came out. Here's how they've shaken the board: 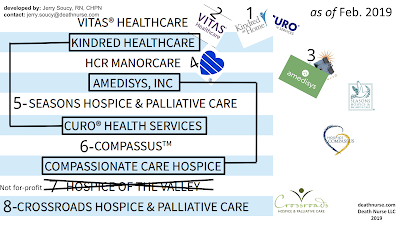 There's no reason to expect this to end anytime soon. The top player, either Vitas or Kindred/Curo, still has less than 5% of total national market share.

Only seven players, or five, have more than 1%.

We're looking at a classic "fragmented industry" as taught in business schools everywhere - one ripe for consolidation, with lots of money to be made buying and selling hospices. 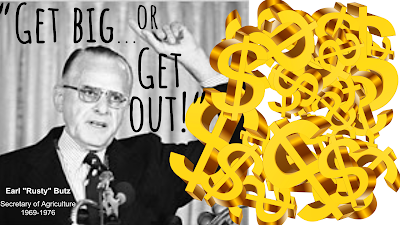 Boomers are getting old, sick, and dying. It's a demographic wave, and the surf is most definitely up.

Note: I developed these graphics as part of a project to present the overall story as a presentation or video. That's part of the rabbit hole. I'll get it done.

Also, too: be sure to follow Strange Tony's ongoing saga of corporate psychopathy at Generic Hospice, and the deeply personal reporting by Steve Lopez at the LA Times about how a hospice agency failed his mother and family.

Thanks for reading. See you next time.
Posted by Jerry at 2:13 PM