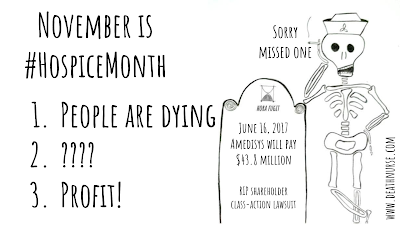 I think we're going to need a bigger scorecard

Yesterday we unveiled the Death Nurse Hospice Fraud Wall of Shame, but somehow missed this $43.8 Million settlement of a shareholder lawsuit filed against Amedisys in 2010.

The total paid for 13 settlements on the Death Nurse Hospice Fraud Wall of Shame currently adds up to over $381.34 Million.

Read the full account of the angry investors at Modern Healthcare. Some snippets:

"The settlement... is the final chapter of a seven-year legal battle that also saw Amedisys pay $150 million in 2014 to the U.S. Justice Department ...The shareholders said in the class-action that their investment in the Baton Rouge-based company had been damaged by the Medicare fraud scheme."

"... neither the company nor any individual defendant concedes or admits liability... Amedisys noted in its filing."

Thanks for reading, see you next time, let's keep 'em honest!