November is hospice month! Commit a crime, pay a dime 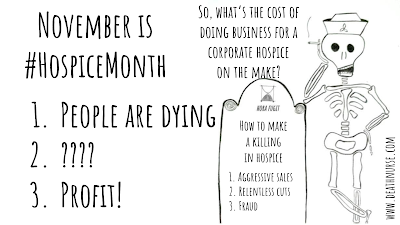 I spent fifteen (15) minutes on Google to come up with this rogue's gallery that includes some of the largest and loudest for-profit corporate hospice players in the game. It's not a definitive list, but compiling one would be a worthwhile endeavor.

For now - the first draft of the Death Nurse Hospice Fraud Wall of Shame, based on my brief, superficial, but nonetheless informative research, here presented in chronological order.

These 12 settlements add up to over $337.54 Million. The September bust in San Francisco is one to watch.

For a sense of the money at stake, Medicare paid about $19 Billion in claims for hospice care in 2017.

Wednesday, July 13, 2016
Minnesota-Based Hospice Provider Evercare to Pay $18 Million for Alleged False Claims to Medicare for Patients Who Were Not Terminally Ill

Thanks for reading. See you next time. Keep 'em honest!
Posted by Jerry at 12:30 PM