Call to action for HPNA (and other nursing orgs)

Last March, the Hospice and Palliative Nurses Association, of which I'm a member, announced several awards. These awards are given to recognize the outstanding work of notable contributors to our field.

I'm proud to know some of the recipients personally, or at least to have met and listened to them. I've certainly gained much benefit from the work of every one in some way. Our colleagues are awesome.

Recognition and awards are important. They have meaning - or they should.

A trophy inscribed, "Everybody Gets an Award!" is hard to take seriously in some contexts, but it's still a nice sentiment, because almost everybody likes and deserves some kind of recognition.

But when an ostensibly important award goes to someone so obviously undeserving... that's another matter.

Such was the case when HPNA named the senior senator from Maine as the 2018 recipient of the "Presidential Citation Award."

There's nothing in the text of the announcement above to justify any kind of award or special recognition, except maybe one for perfect attendance. "...never missing a vote in her 20 years in office."

Seriously?! A senator is given an award for voting on legislation? Isn't that part of the job description? Isn't voting something she's supposed to do?!?

In the immortal words of Chris Rock:

The announcement also notes she was," ...a key voice in the recent Affordable Care Act discussions." That's technically accurate, if you want to call the relentless republican attacks on the law, "discussions." 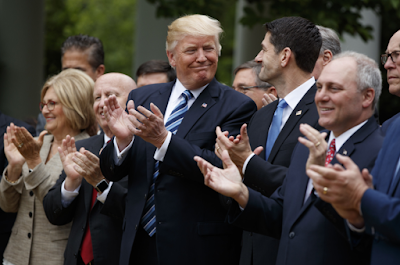 As long as we're talking about taking health care away from people, that's the execrable token woman Diane Black front and center, cheering heartily last year after House republicans voted to repeal the Affordable Care Act. She currently represents TN-6, but is running for governor as a flat-out nutjob. She's all-in on trumpist anti-humantity, and still calls herself a nurse. Disgusting. Please do what you can to see that she's soundly trounced.

Back to the senior senator from Maine. Whatever small sliver of heroism, or a cookie, she may have gained by preventing the Senate from following the House at that time, she promptly pissed it away by backing the equally horrible income redistribution bill and rich person's tax cut.

She also demonstrated either her procedural incompetence or utter cynicism with her feeble, and eventually unsuccessful, attempts "fix" the damage caused to the ACA by the tax bill she voted on.

I'm not a big fan of WaPo's Jennifer Rubin, but she nails the senior senator from Maine to wall in, 'Susan Collins in enabling a bad tax bill.'

Why does this even matter? Why now?

One simple reason: It's currently the U.S. government's policy to separate families arriving at the border seeking asylum and protection from violence, promulgated through an executive order by the president*. 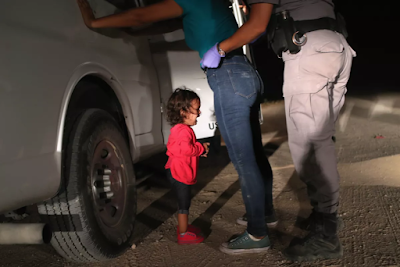 Immigrant families are being separated
at the U.S.-Mexico border. (VOX)

These are not normal times. We need leadership now more than ever, and in particular we need women leaders and others who've been marginalized and ignored to step up and take charge.

So, what to do next:
Nursing is intelligent caring. Time to act.
Posted by Jerry at 1:08 PM