His eulogy was carefully written and well-delivered. Her death was a serious matter, worthy of his best efforts and intent, suited to the deep grief and disorienting loss everyone felt.

And so sudden, her trajectory like a sled speeding down an icy mountain trail then gone.

The richness of her life filled the place, an evident glow not from one source but everywhere, variously dimmed or brightened by the music, scripture, and tributes of her many closest friends.

His eulogy stood as the formal account of her life before sickness, and definitive chronology of all she endured after. It was a tale of battles, courage, and doctors. It ended in death. 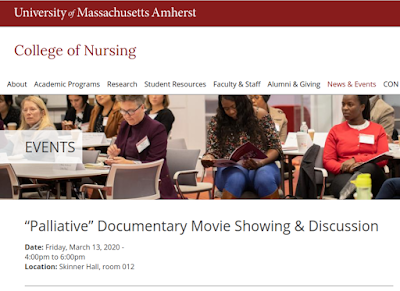 At the UMass Amherst College of Nursing

“Palliative” Documentary Movie Showing & Discussion with filmmakers and the physician featured in the film.

The event is being co-sponsored by the Northeast Death Care Collaborative and the College of Nursing Seedworks Clinical Assistant Professor of Social Justice in Nursing and partly supported by a Center for Teaching and Learning Flex Grant. It is a community engaged event!

It is taking place March 13th from 4-6 pm in Skinner Room 012. The movie is a documentary short. After the showing we will have a question and answer with the producer - Dr. Brady, Director - John Beder, and Dr. Tremonti (the physician that is the main "medical" character in this film).”

Because who better to teach nursing students than doctors? 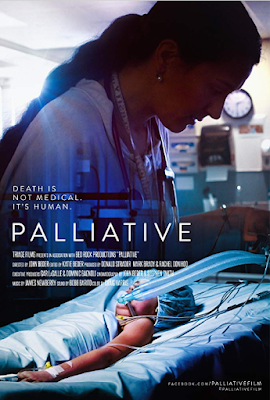 “A documentary short exploring the conversations during end-of-life care with pediatric Palliative care specialist Dr. Nadia Tremonti. Palliative also highlights the caretakers and families working with Dr. Tremonti. Filmed in Detroit at the Children's Hospital of Michigan over several years 'Palliative' aims to introduce this vital area of care struggling to overcome the stigmas of death and dying.”

Can a medical director ‘de-medicalize’ death? Does palliation conflate with death? Are doctors heroes looming large over death, in the face it, or both? 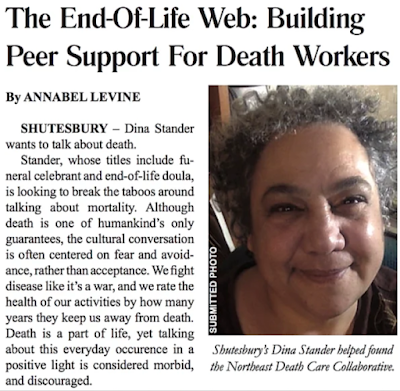 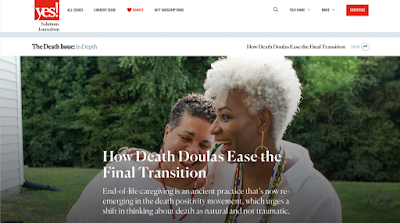 “Aunt Cora” encouraged Burney-Scott to whisper her love in her mother’s ear, to hold her hand, play music, and to be present in “an organic practice.” One day, when her mother struggled to breathe, Cora assured Burney-Scott that she didn’t need to fetch doctors—that nothing was wrong. “She’s leaving,” Cora told her, a simple statement that’s also a tenet of end-of-life care: Death can’t be controlled, but you can prepare for some aspects of it.”

* With thanks to Dr. Monica McLemore
Posted by Jerry at 11:17 AM